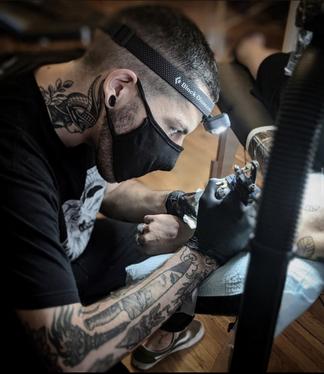 ​Jonny Agoes grew up in rural New Hampshire and gravitated towards art and music at a young age. He got his first tattoo when he was 17. He was hooked on the art form, and was drawn to the permanence that went along with it. Shortly after he bought his own tattoo kit off of eBay and dabbled on himself and his friends. They loved it but he knew he sucked. Not really being exposed to reputable tattooing in New Hampshire, he actually started his career in the tattoo industry when he moved to Denver, Colorado at 24. He decided to do things the right way and begin an apprenticeship.

He considers his style as constantly evolving but predominately is a Neo Traditional artist. He considers himself well rounded and also enjoys tattooing traditional, Japanese, and soft black and grey. He loves tattooing snakes, bugs, skulls, daggers, flowers, animals, and anything creepy. He also enjoys using muted earth tones and bright color pops when I can. He will never turn down Neo Traditional soft black and grey as well. Starting his next chapter in Asheville he strives to learn from being around new artists and continuing to evolve his style.​