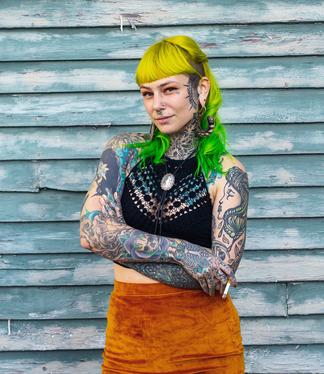 Britnee aka HoneyBlood is a queer artist from New York by origin where her tattooing career began. She has since tattooed in Pennsylvania, Nova Scotia, Seattle, Georgia and now her home base, Asheville North Carolina.

She has been an artist since birth, working with multiple different mediums which eventually led her to tattooing. She was always fascinated with the idea of wearing art permanently, as well as the idea of tattoos being a healing aspect.

Her art is heavily influenced by Nature, magic, healing and growth. She considers tattooing a craft of energy work for her clients as well as herself. Her influences bring an outcome of modern traditional styled tattooing. Her style sees as somewhat feminine with packed colors and bold lines.